Sacred music or liturgical music — vocal or vocal-instrumental (sometimes instrumental) works based on canonical, religious texts or plots[1]. First of all, sacred music includes works intended to be performed during religious services, however, with the deepening of the secularization of art, many genres of sacred music were transformed into secular ones, while retaining a religious orientation.

Classical examples of Ukrainian sacred music were created by M. Berezovskyi, D. Bortnyanskyi, A. Vedel (spiritual concerts), S. Vorobkevych, M. Leontovych (Liturgy of St. John the Chrysostom, parts of Vespers), K. Stetsenko and others. M. Lysenko’s work “God is great, one” has become a spiritual hymn of Ukrainians all over the world. A pioneer in the study of the musical material of Ukrainian spiritual musical and poetic texts was the spiritual composer and ethnographer O. Vitoshynskyi.

A significant surge of interest in sacred music in Ukraine has been observed since the 1990s, after Ukraine gained independence and the lifting of restrictions on the promotion of religious works. L. Dychko’s “Liturgies” (1989, 1990) became the first significant work in this genre after a long break. In the future, such composers as E. Stankovich, M. Skoryk, V. Stepurko, H. Havrylets, and later V. Sylvestrov[2] turned to spiritual music. A significant contribution to the revival and popularization of Ukrainian sacred music was made by Mykola Hobdych, the founder of the “Zolotoverkhy Kyiv” festival and the “Kyiv” choral group, in which many works of Ukrainian sacred music were performed for the first time.

As you have already understood from the name itself, spiritual music is not a subject of worldly entertainment. It is connected with the religious side of peoples living on Earth. Sacred music has a religious content of the texts and is intended for church or temple worship. The ideas about her in different religious traditions differ:

In Christianity, sacred music is divided into Catholic, Orthodox, and Protestant. The most common genres of sacred music are psalm, chorale, hymn, sequence, mass and passions. In Orthodoxy, a special place is given to the Universal Service.
Spiritual music plays an important role in Jewish beliefs. It was introduced into the church ritual during the reign of King David – in every temple there was an orchestra and a choir. Today, synagogue music with a prayer genre is developing.
In Islam, it originated in India in the 13th century in the process of fusion of Indian music and Persian poetry. It is called Qawalli, and it praises the saints, the Prophet Mohammed and Allah.
Genres of spiritual music
At the beginning of the emergence of sacred music, only church ministers could write it. The most widespread were the works of Pope Gregory I, monks Tommaso da Celano and Jacopone da Todi. Later secular composers could compose spiritual music. After the Reformation, hymns, chorales, and the Passion were popular. They were mostly written by Martin Luther. By the way, the Passions appeared in the 17th century and were based on the events of Holy Week, chapters of the Gospel, and stories from the Old Testament. For example, such works of sacred music – “Seven Words of Christ on the Cross” (Heinrich Schütz), “Seven Words of the Savior on the Cross” (Joseph Haydn), “The Christmas Story” (Heinrich Schütz), “Christmas Oratorio” (Bach), “Israel in Egypt “(Handel). After the Renaissance, requiems and masses began to be created. Let’s dwell more specifically on each genre.

Psalms are small pieces of music based on the texts of the Psalter. They are considered the oldest genre of spiritual music. Since the 16th century, they have been used as a funeral prayer. In the 19th and 20th centuries, revised or original psalms were written by Mendelssohn, Bach, Handel, Schubert, Reger, Penderetsky, Yanchenko. The most famous psalms of I. F. Stravinsky are called “Symphony of Psalms”. 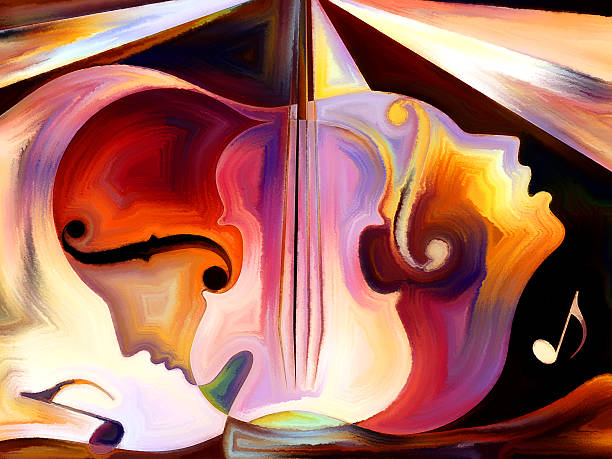 Inner Melody series. Interplay of colorful human and musical shapes on the subject of spirituality of music and performing arts

Masses are vocal-instrumental or vocal works that represent the assemblies of the Catholic liturgy. The first author’s mass was written by Guillaume de Machaut in the middle of the 14th century – Messe de Notre Dame. At the beginning of the 19th century, the mass separated from the divine service and became part of concert practice. The authors of such works were Beethoven, Bach, Schubert, Mozart. In the 20th century, interest in it began to fade.

Requiems are originally funeral Catholic masses. The earliest work is a Latin canonical text, Dufay’s Requiem. It has not survived to this day. The first preserved text is “a capella” by Johannes Okegham (XV century). From the second half of the 18th century, requiems became part of not only sacred music. Famous authors are Mozart, Verdi, Berlioz, Fauré, Cherubini, Brahms, Britten, Zelenka and Bieber.

Passions are vocal-dramatic works dedicated to Holy Week and were originally based on Gospel texts. The earliest works belong to Orlando Lasso and Jacob Obrecht (XV-XVI centuries). This genre of spiritual music was popular until the middle of the 18th century. After that, composers forgot about him until the 20th century. Hugo Distler contributed to the revival of the Passions by writing “Choral Passions”.

Stabat Mater are Catholic hymns in the Latin text of Jacopone da Todi.

We hope that the story about spiritual music helped you prepare for the class and deepen your knowledge in the field of art.
Source: https://dovidka.biz.ua/duhovna-muzika-referat