Two musicians from Cherkasy arranged a concert for patients of the oncology dispensary. It was the first concert on the territory of the medical institution since the beginning of the full-scale war, said the organizer Svitlana Fedorova.

Patients and doctors listened to the saxophone and guitar from the windows and in the open air.

Usually, the musicians play for the citizens on the central square, but this time they played for those who are fighting their personal battle with the disease, Volodymyr Chekryzov said.

From the smallest to the oldest patients came out from the wards and wards to listen to music.

Someone danced on the spot. And Eva is close. Before her illness, the girl performed on stage, her mother Alyona Kusaiko said.

“She loves dancing and performing. Such concerts are necessary to support people. A good concert,” the woman commented.

For the first time since the beginning of the full-scale war, music played in the courtyard of the oncology dispensary, concert organizer Svitlana Fedorova said.

“We had a patient who said that she does not allow herself to die. She is waiting for our concerts,” said Ms. Svitlana.

Volodymyr and Oleksandr perform together, are lifelong friends and are both professional musicians. They volunteered to come as soon as they were invited, said the organizer.

“Life is hard, but you have to live somehow. Life goes on, it does not stand still. Let people be cheerful,” commented Volodymyr Chekryzov.

Musician Oleksandr Tsymbal himself was treated at the dispensary. However, he mentions it reluctantly. Music helps him, so he decided to share it with the patients of the hospital.

People who are struggling with the disease often cry when they hear this kind of music. This is how they emotionally relieve themselves, and this is necessary for treatment, explained Nadiya Azamatova, a psychologist at the oncology dispensary.

“Illness is the fear of death, the fear of what the future life will be like when a person recovers, where to get money. Maybe someone is worried, and music gives respite,” commented the psychologist.

The organizers plan to continue the tradition of such concerts for oncology clinic patients. 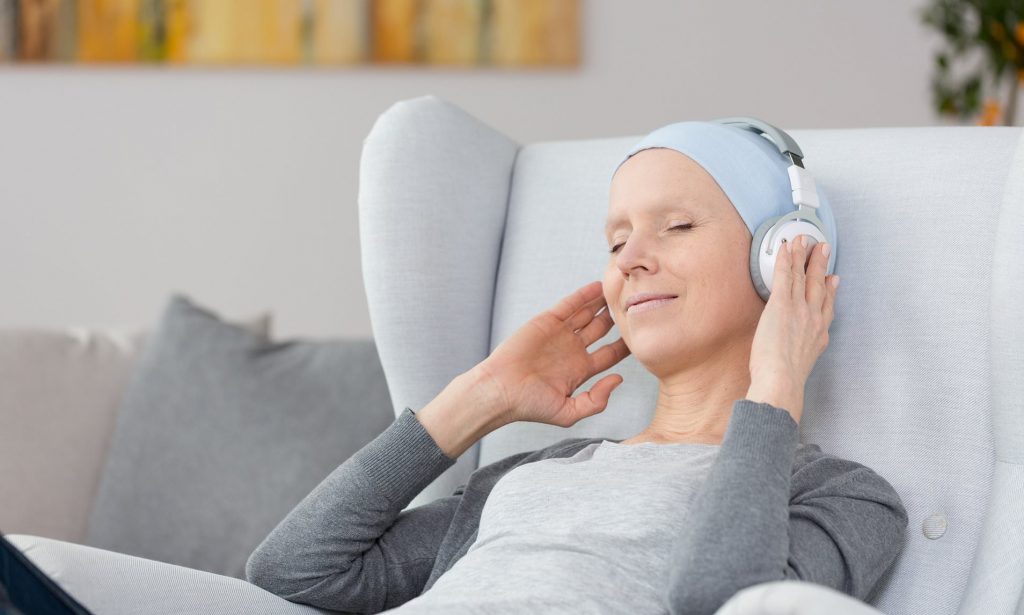 Zhytomyr musician and now military man Ihor Voyevutsky collects money for beads for his brothers. He told the correspondents of Suspilny Ihor that between volunteering and working at roadblocks, he is working on recording an album based on the poems of Ukrainian classics.

Ihor has been involved in volunteer activities since the first days of the full-scale Russian invasion. Now, he says, there is a decrease in the activity of people in terms of donations.

“The boys have been going to “Moskvich” for three months, and I can’t collect money. It’s very difficult to raise money, although we understand the needs – it’s more difficult for the boys on the front lines. Now I’m trying to refuse some things that I can’t do,” he says Igor.

Musician Ihor Voyevutskyi. Photo courtesy of Ihor Voyevutsky
According to him, in between volunteer activities and duty at checkpoints, he is still working on recording an album based on the poems of Ukrainian classics. The plan is to create 10 compositions.

“We have been doing this for three months, making both a concert program and an album. Among other things, we want to present this album in schools. I am a teacher by first education, I would like to hold open lessons – come with a guitar, sing a few songs based on the verses of Ukrainian classics, we want make such a tour of schools.

More on the subject
“Hands of help”: in June, Ihor Voyevutskyi was given paper palms with wishes from children glued to the plate carrier.

People’s artists of Ukraine Nataliya Sumska and Anatoliy Hostikoev, during their tour in Zhytomyr, told Suspilny about how they live the events of a full-scale war and support their audience and the soldiers they visit in hospitals. About the theater during the war, about the importance of the Ukrainian language and art, and about the need to believe in yourself and your country: all this and more – read and watch in the interview.

We are having our conversation with you in the conditions of a full-scale war in Ukraine. How are you experiencing this war? How did it affect you, as an ordinary Ukrainian couple?

Natalia Sumska: We have already learned not to cry and we learn this from our soldiers – we watch videos from the front and see how they behave in extremely difficult conditions. We don’t have the opportunity to get to the forefront – at the moment there is no way to take a performance there, as it used to be. After all, today’s war is an artillery war, anything can happen. That is why we are currently trying to be at least in hospitals.

Anatoliy Hostikoev: When we were going to Zhytomyr, we knew that we would definitely go to meet our soldiers. After all, we want to communicate and thank those who give us the opportunity to work, who protect our peace. We literally just came from the hospital, where we talked with our heroes. These meetings are always exciting because you feel a huge debt to them. They do what I unfortunately cannot do now. You asked how we took it – frankly, it was scary. But gradually this fear turned into another state – into hatred and a huge belief that we cannot be defeated. And the very understanding that someone for some reason decided to destroy our nation, our people, our language, our culture – this causes great hatred and motivates. You understand that there are no tears here, you have to be able to put them in their place and destroy them as best you can. For example, we have art – we have performances that we dedicate to our soldiers and our viewers. And that’s why we responded with great joy to this opportunity to meet with our viewer in Zhytomyr.

Natalia Sumska: Our tour took place right now, although we were supposed to take this play to Zhytomyr on February 24. But, despite everything, we are here now.

Life stopped on February 24. How did you find yourself? How long did it take you?

Natalia Sumska: Two months. And then somewhere in central Ukraine, we were in Podillya and there, just as we were visiting our military now, we were in the Teroboron detachments. The people we met also gave us a kind of impetus – we met talented people who shot mini-films. About the same Mariupol, about people sitting in basements. The people themselves became more active – in the towns we were in, people organized drama groups. And we, fortunately, were also involved, because we also needed an audience.

Both of you are Ukrainian-speaking actors who have clearly defined your position from the very beginning. We have seen your appeal to the military and medics that you recorded in early March. Therefore, I will not ask you whether Ukrainian theater and the Ukrainian language are important. I will ask why exactly this is important, including for you personally?

Natalia Sumska: Because it is a weapon. The most important. You hear what the representatives of the Moscow sphere of so-called art and culture are saying. How is Lina Kostenko? Samsedshi people who carry things that will not fit on any head.

Anatoliy Hostikoev: The most important thing is that for some reason they believe that they have the right to destroy an entire nation. But who are they? Therefore, yes, of course, language is a weapon. And they, as it turned out, are afraid of her the most. Do you understand? When they now start talking about the Ukrainian language, they say that it is a language that will destroy them. Of course.

Nataliya Sumska: And that’s good – they raise the value of our language.

Natalia Sumska, Anatoliy Hostikoev: Ukrainian art is also a powerful weapon
People’s artists of Ukraine Anatoly Hostikoev and Natalia Sumska. Telecentr, Zhytomyr, September 2022. Photo: Zhytomyr Society
As actors, you get the heat from the hall. But in such situations, when you need to keep your face, keep your composure, how do you manage to do it?

Nataliya Sumska: It’s okay, even if a tear falls, you can rub it in and move on. The main thing is not to lose yourself. It is necessary to keep one’s self, to keep one’s order – as everyone is now teaching one another.

Anatoliy Hostikoev: The thing is that for us, meeting the audience is always an exciting moment, because every time you go out in public, you bear a huge responsibility and you have to treat the audience with great respect. The play “Incomparable”, which we brought – the story takes place there in 1944. The singer Florence Foster Jenkins gave a concert at Carnegie Hall, and there were soldiers who fought in World War II. When we staged this play, we could not even imagine that war was waiting for us too. But it so coincided that Florence says one phrase. Natalya, tell me, how about these mines?

Nataliya Sumska: Florence, whose role I play, receives a letter from American soldiers who helped win the Second World War. And now the American side is also helping us, and we are very grateful to our colleagues, partners and friends from the USA. So the military sent a letter saying, “Florence, we wish you a happy birthday. We don’t know when you were born, but the way you sing helps us a lot. When we play your recording, it helps us silence the sounds of exploding mines, and we cease to be afraid.

But as far as I know, Mr. Anatoly, this was your directorial move.

Anatoly Hostikoev: Yes, I wrote it into the script – this letter. Because really, it fits so well here. You see, Florence Foster Jenkins is an unusual figure, because she sang because she really wanted to sing. This despite the fact that she had neither voice nor hearing. But it was her dream, and she sang – she sang for everyone, and that’s why this performance turned out to be very relevant.

Natalia Sumska: This is a colossal echo of those events. Perhaps, if we speak directly, it would not work that way, but we say it associatively, because wars, unfortunately, happen. That world war was terrible, and the current one is extremely terrible. The main message of the performance is self-belief. You can or you can’t, but you have to believe in yourself. It happens that the one who can is shy, and the one who can’t, on the contrary, is very active.